First posted on Tales From The Reach and the Herts & Bucks TSA blogs on Wednesday 11 April 2018.

Mind-maps, spider-diagrams and concept-maps are diagrams that visually represent, organise and order information that would otherwise be written as text. We often use variants of these activities in lessons, but use the terms interchangeably and incorrectly; I have regularly referred to spider-diagrams as mind-maps, thought-showers and brainstorms, for example. However, mind-maps, spider-diagrams and concept-maps are actually quite distinct and represent information differently (even if they initially look the same). It is well worth understanding these differences as these three methods of visually representing information are arguably better suited to different types of learning activity; for example, mind-maps are better placed for exploring and evaluating what may have caused a controversial historical event (if the causes are disputed) whereas concept-maps allow pupils to make connections between different types of abstract concepts, such as those found in subjects like sociology, where the links merely demonstrate how the theories are linked within the subject or topic area or are dependent on similar ideas. In the former the connections or links may be direct and hierarchical as opposed to the latter where the connections may be more indirect and tentative. The examples below are based on sociology, but the processes discussed can be applied to other subjects and topics too.

Mind maps are a common feature of most lessons and can be used in almost any subject. The general concept of a mind-map is often credited to Tony Buzan, who has trademarked the term, and has written some useful rules to follow when creating them. However, they are very straightforward.

One of the key benefits here is getting the pupils to actually see how ideas, concepts or theories link to various other phenomena, such as facts, situations or events; these phenomena may make up the idea, concept or theory being studied (or “mind-mapped”) or they could all be caused or result from it. A mind map can also link various ideas and theories. However, the linkages must be hierarchical; otherwise a concept map might be better suited.

For example, figure 7.4 shows a mind-map of some basic ideas of right-realism (an idea in sociology explaining the causes and consequences of crime). Although it does not include names or studies, it does map key ideas and then brief examples from those ideas.

Figure 7.4: a simple mind-map on right-realist views of crime

In a similar vein to mind-maps, spider-diagrams start with a single word, concept or theory in the centre of the page. However, whereas Buzan says that mind-maps should stick to single words as ideas branch out across the page, a spider-diagram will incorporate more information, perhaps in sentences or even short paragraphs, and will have nodes coming off of each hierarchical line, which in turn will have its own sub-branches. When mind-mapping in class and for revision, pupils do normally complete finished work that more closely resemble spider-diagrams than mind-maps. This is simply because they use far more text than is recommended for a spontaneous mind map (see figure 7.5).

Figure 7.5: a spider-diagram of left-realist views of crime. Please note that these nodes have no sub-branches, but there is no reason why they cannot be added.

Unlike mind-maps and spider-diagrams, concept-maps connect multiple concepts or theories as opposed to connecting lots of simple ideas to one central concept. In essence, a concept map is far more complex than mind-maps and spider- diagrams, as in a concept map the pupil will endeavour to connect each term, concept or theory to another and eventually back to the original concepts or theories used instead of merely branching away from the main concept with associated ideas. This is particularly useful for subjects like sociology as by making connections between individual agents, such as individuals in society or interactions between people and social groups, pupils can start to make connections between smaller acts and the wider structures or processes of society. Importantly, they can start to see how individual actions form part of a larger whole. An example of this is using concept maps to visually represent how the sociological perspectives of functionalism, Marxism and social action theory all have different explanations on what leads to success and failure in school (see figure 7.6). 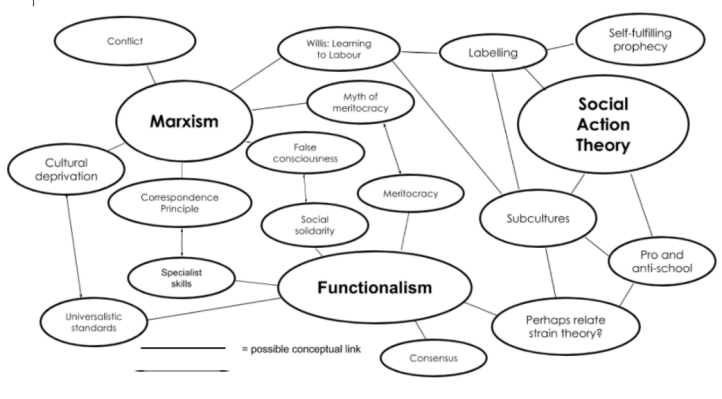 Figure 7.6: a concept-map linking some key theories and some of their views on education

Importantly, a very well-made concept map can be developed within a specific context frame in order to unpack a focus question, which can constitute an exam question in the context of teaching sociology. Whereas a mind-map or spider-diagram’s branches do not fully relate back to the central concept or theory other than by backtracking, a concept-map can visually represent all the key features needed for an essay question before explicitly relating the final ideas back to the exam question or concept/theory. This mirrors the skills needed in evaluative essays, especially if we are to get the pupils referring back to the question and summarising their points in relation to the question asked by way of a conclusion. Therefore, concept maps will be useful for social science subjects, such as sociology, politics and psychology, as well as any subjects that involve extensive evaluation of ideas, including English, media studies, history, religious studies and philosophy amongst others.

This blog is adapted from my book, Teaching Sociology Successfully: A Practical Guide to Planning and Delivering Outstanding Lessons (Routledge, 2017). It’s available from Amazon.

The featured image is also from Teaching Sociology Successfully.